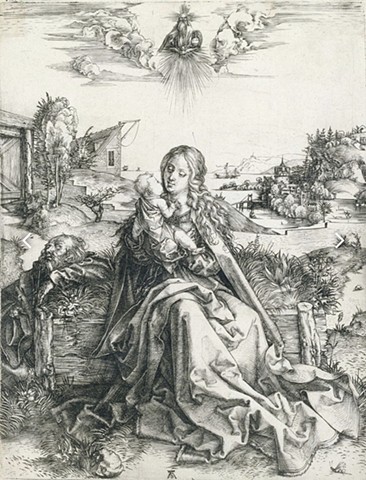 The Holy Family with the Dragonfly Albrecht Durer, Engraving, 1495 en.m.wikipedia.org/wiki/The_Holy_Family…

The dragonfly effect is a concept regarding small acts bringing big changes. Since another dangerously active hurricane season has been predicted, I’m going take you back to Hurricane Katrina in 2005. This scene is well before Greta Thunberg caught everyone’s attention regarding Climate Change in 2018. In late August 2005, the state of Louisiana evacuated approximately 1.5 million people before Hurricane Katrina made landfall. However, approximately 150,000 to 200,000 individuals (accurate numbers were difficult to attain) remained during the storm. While many people chose to stay, others did not have an opportunity to evacuate because of unavailable resources [1]. It’s the people who chose to stay for a category 5 hurricane praying for it to downgrade to a category 3 hurricane that still send chills down my spine. We have witnessed the crowds of nonbelievers including a sitting president again with the Covid-19 pandemic in 2021. In my opinion, saying the truth hurts to avoid statistics or saying the truth is too extreme to avoid publishing facts and avoiding building trust with the nonbelievers will lead to the destruction of the planet.

After Hurricane Katrina, I moved to Boston and realized there are places that have never been hit by massive scale natural disasters. I also realized, people who have had no experience with a natural disaster will not comprehend the magnitude of devastation. There is no reference point in many people’s minds to create an internal understanding of a major natural disaster. It’s not just that we live in this idyllic fantasy of things being perfect— it’s that most humans reference their daily life for understanding. So, if nothing out of the ordinary happened to you it’s hard to understand how or why it happened to anyone else. Therefore, I’m going to explain this situation of Hurricane Katrina in an effort to provide the severity of the damage and remnants.

Before Hurricane Katrina, I thought, “oh, I’m a good person and that won’t happen to me.” I have no clue why I thought this way other than it had never happened to me. I literally grew up in Mobile, Alabama on the Gulf of Mexico. I remember evacuating storms as a kid and I remember minor damage. I never saw it—there for I was not able to imagine a completely destroyed by wind and flooding town. Now, I realize these huge natural disasters fire, hurricanes, tsunami, earthquakes, tornadoes, and pandemics are what we have to actually PREVENT.

There’s a commercial on the radio that has a woman with a New Jersey style accent saying, “I’m a good person. I pay my taxes.” Then this commercial moves into a spiel on buying a car with no down payment. You’re probably thinking— yeah— just because you’re a good person doesn’t mean you can afford a car and being a good person doesn’t make you a safe driver. Most Americans have experienced or seen ridiculous car accidents. But it’s probably hard to visualize and imagine and mentally process how cars destroy the environment because you don’t see that part of car driving and car ownership.

We’ve all had someone say, “it’s just me, I’ll only be a minute” and you are probably just baffled wondering what the hell they are about to do. It’s the autonomy of “just me” mentality that is creating huge challenges for everyone on this planet. It’s not just selfishness. It’s the dragonfly effect playing out on a massive global scale that includes everyone.

The dragonfly effect states that small movements can have great consequences.

None of us is ever going to be perfect with recycling and transportation. Some of the damage is already done. But saying, “oh, it’s just me.” like everything is okay because you’re the only one— that’s got to go. Stop saying, “it’s just me” because you’re not the only one and the dragonfly effect states small amounts can have great consequences too. Another way of looking at the population is through one of my most nauseating pet peeves. I don’t like people who preach day and night about clean water while they drive the biggest gas guzzler and they are the only person riding in the vehicle. You’re probably thinking, “one person driving a big car is no big deal.” Multiply this “no big deal” car situation by 100 million people or 1/3 of the entire United States population. Plus, add in hundreds of millions of people world wide who are driving large vehicles by themselves. Then, add in that fracking, which is polluting water systems, was invented to extract oil and gas to put in vehicles. Visually connect the dots between cars, exhaust, trash, oil, gas, the environment, clean air and clean water. This thought may smell bad and taste bad because you can synthesize clean air and clean water compared to breathing exhaust fumes and drinking dirty water.

In my opinion, everyone should use public transportation. Yes, I understand whole families rely on income from gas and oil to live. Yes, I understand some families live in suburban and rural areas and need individual transportation. There are 3 “maw and pop” small grocery stores in the downtown area of my city. The other day, a guy just made the statement, “this is a food desert. There’s 3 apartment complexes and no grocery stores.” So, I pointed out the Mexican grocery store, the Asian grocery store, and the Sav-a-lot. All of these stores are in walking distance. So, this guy says to me, “I mean grocery store like Walmart.” I told him he would have to take the bus to Walmart. So, let’s just say corporate America is not going to fix the problem. Yes, Amazon is trying but they aren’t there yet.

Here’s another pet peeve— people saying “it’s too hard” or “that’s not what I want to do.” So, literally everyone is going to have to put some effort in and not smirk their way out through some cutsie “it’s just me” mantra. If you are 18 and female you are now Maw. If you are 18 and male you are now Pop. Maw and Pop, age 18 and up are going to be the regular everyday Americans that are small business owners and hard workers doing extra hard work to create livable sustainable eco friendly communities. I was 23 years old when Hurricane Katrina kicked my ass. It wasn’t fair and I vividly remember it daily. To move forward from the devastation and maintain sanity, I have had to accept it’s not ideal and will never be perfect but I have to at least put forth effort to make better choices for the environment.

There’s just not a perfect solution where everyone will be relaxed, cozy and comfortable. On one hand you can keep your cars and gas and destroy the planet. On the other hand you can give up your car and walk or bike or use public transportation and help slow the damage already done to the environment by burning oil and gas. Maybe you can get your family down to only one vehicle. Maybe you decide to get a CDL license and make a career being a bus driver. There are solutions to the global pollution crisis and it will take everyone pitching in to help.

XOXO! JML Why believe in God?

This article is for everyone who questions everything and wants tangible proof handed over for all of their questions. I’m not saying go be gullible— I’m just saying— you question God, you question tornado warnings, and you probably voted for Trump. Go find a way to believe without making us all suffer.

Fridays for the Future fridaysforfuture.org/

This is the most historically relevant book for what is happening at the US Southern Boarder.

Stations of the Cross pdf img-cache.oppcdn.com/fixed/9887/assets/…

How to pray the rosary pdf img-cache.oppcdn.com/fixed/9887/assets/…

The Benedictine Rule Benedict of Nursia