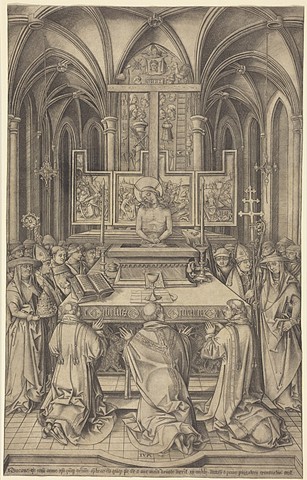 “In this version, the Pope was saying Mass when a woman present started to laugh at the time of the Communion, saying to a companion that she could not believe the bread was Christ, as she herself had baked it. Gregory prayed for a sign, and the host turned into a bleeding finger.”

Most Precious Blood of Jesus

The Blood of Christ belief in Catholicism is pretty popular for Protestant Christians to poke at. While some aspects of voodoo to cross over into Christianity and Catholicism, priests are not practicing witch craft, magic, black magic or voodoo during a Vatican approved Roman Catholic Mass. To be clear— Christ’s Blood was shed for the salvation of mankind and the Eucharist is a celebration of Christ’s life and Christ giving His life to all of us.

On a personal level— there have been three instances where I interacted with the Blood Of Christ and it was a witness to keep faith in my own life.

1. At a Mass on campus at Boston University I spilled the Eucharist on my shirt. This was after Hurricane Katrina and definitely a “sit down come to Jesus” phase in my life. And after Mass, I talked to the priest about soaking my shirt and saving the water and taking that water back outside to pour on the ground. So, essentially I took Jesus out to the Charles River beach area and found a child’s purple floral barrette and I decided that was a good enough spot for Jesus. It was probably more healing to do that than yell at the wind about all my rage. So, I treasure that memory as a “God works in mysterious ways” moment.

2. So, I had a dream once that the Blood of Christ was drawn on my forehead in a cross like form— like Ash Wednesday ashes but with blood— and the blood started dripping down my nose in the dream. It was cosmic and definitely questionable. I don’t talk about that one too much because it was a dream. In my experience, conscious and subconscious mind interactions are best left to personal interpretation.

3. I washed and sewed a priest’s alb. This alb was ripped down the side, stained, and dirty. The moment I dropped it in the tub of water one of the stains lifted and floated like blood. This was also another very personal private moment. I was by myself and I had talked to that priest briefly because his robe looked like hell and I was mostly tired of him wearing it to morning Mass. And I remember thinking why has he not had this repaired. And of course he was reluctant to give it to me. He told me it belonged to one of his deceased mentors. I probably took better care of that Alb after watching the stain lift. It was like the Alb was letting me know—> this is for MASS give it your best.

Transubstantiation (Latin: transsubstantiatio) is, according to the teaching of the Roman Catholic Church, the change of substance or essence by which the bread and wine offered in the sacrifice of the sacrament of the Eucharist during the Mass, become, in reality, the body and blood of Jesus Christ.

In honor of The Most Precious Blood of Jesus Celebrated the first Sunday in July. en.m.wikipedia.org/wiki/Blood_of_Christ Death Comes For The Archbishop Willa Crather