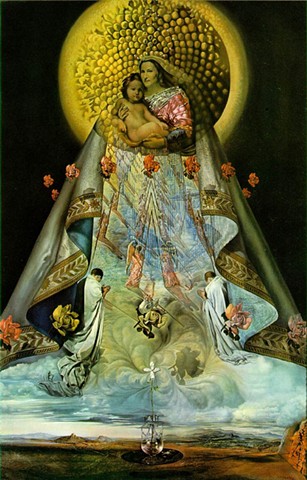 The Virgin of Guadalupe Oil on canvas, Salvador Dali, 1959

Our Lady of Guadalupe

When I reflect on the story of Juan Diego seeing the apparition of Our Lady of Guadalupe, I imagine Juan Diego felt like he was given an impossible task and asked to just persevere out of faith. I also think about Juan Diego trying to get out of completing the task because he felt inadequate and obviously nobody believed him anyway. And the Blessed Mother just pursued Juan Diego as the one she chose for the task.

I’m pretty certain everyone can relate to feeling like a total useless loser. And I’m certain everyone can relate to feeling like a loser because someone treated you like you were nobody important and essentially nobody worth knowing and thus you must be a total loser. And that’s the story of Juan Diego trying to get the attention of the Bishop to build the church the Blessed Mother requested. And what do you know, as it turned out Juan Diego wasn’t a total loser. He went from zero to hero because the Blessed Mother came through with some miracles to get the bishop’s attention.

Here is the story of Juan Diego according to Wikipedia.

Juan Diego, as a devout neophyte, was in the habit of regularly walking from his home to the Franciscan mission station at Tlatelolco for religious instruction and to perform his religious duties. His route passed by the hill at Tepeyac.

First apparition: at dawn on Saturday, December 9, 1531 while on his usual journey, he encountered the Virgin Mary who revealed herself as the ever-virgin Mother of God and instructed him to request the bishop to erect a chapel in her honour so that she might relieve the distress of all those who call on her in their need. He delivered the request, but was told by the bishop (Fray Juan Zumárraga) to come back another day after he had had time to reflect upon what Juan Diego had told him.

Second apparition, later the same day: returning to Tepeyac, Juan Diego encountered the Virgin again and announced the failure of his mission, suggesting that because he was "a back-frame, a tail, a wing, a man of no importance" she would do better to recruit someone of greater standing, but she insisted that he was whom she wanted for the task. Juan Diego agreed to return to the bishop to repeat his request. This he did on the morning of Sunday, December 10 when he found the bishop more compliant. The bishop, however, asked for a sign to prove that the apparition was truly of heaven.

Fourth apparition: in order to avoid being delayed by the Virgin and embarrassed at having failed to meet her on the Monday as agreed, Juan Diego chose another route around the hill, but the Virgin intercepted him and asked where he was going; Juan Diego explained what had happened and the Virgin gently chided him for not having had recourse to her. In the words which have become the most famous phrase of the Guadalupe event and are inscribed over the main entrance to the Basilica of Guadalupe, she asked: "¿No estoy yo aquí que soy tu madre?" ("Am I not here, I who am your mother?"). She assured him that Juan Bernardino had now recovered and she told him to climb the hill and collect flowers growing there. Obeying her, Juan Diego found an abundance of flowers unseasonably in bloom on the rocky outcrop where only cactus and scrub normally grew. Using his open mantle as a sack (with the ends still tied around his neck) he returned to the Virgin; she re-arranged the flowers and told him to take them to the bishop. On gaining admission to the bishop in Mexico City later that day, Juan Diego opened his mantle, the flowers poured to the floor, and the bishop saw they had left on the mantle an imprint of the Virgin's image which he immediately venerated.

Fifth apparition: the next day Juan Diego found his uncle fully recovered, as the Virgin had assured him, and Juan Bernardino recounted that he too had seen her, at his bed-side; that she had instructed him to inform the bishop of this apparition and of his miraculous cure; and that she had told him she desired to be known under the title of Guadalupe. The bishop kept Juan Diego's mantle first in his private chapel and then in the church on public display where it attracted great attention. On December 26, 1531 a procession formed for taking the miraculous image back to Tepeyac where it was installed in a small hastily erected chapel. In course of this procession, the first miracle was allegedly performed when an Indian was mortally wounded in the neck by an arrow shot by accident during some stylized martial displays executed in honour of the Virgin. In great distress, the Indians carried him before the Virgin's image and pleaded for his life. Upon the arrow being withdrawn, the victim made a full and immediate recovery.

In honor of The Feast of Our Lady of Guadalupe, Thursday, December 12, 2019

About Our Lady of Guadalupe en.m.wikipedia.org/wiki/Our_Lady_of_Gua…