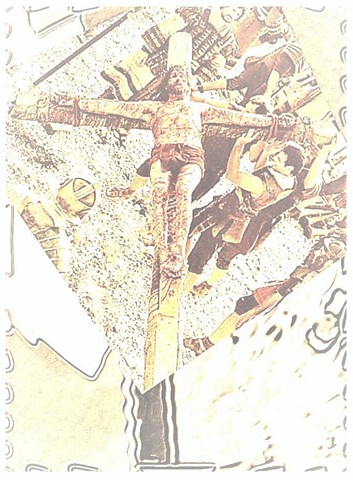 Jesus is Nailed to the Cross Digital Image, Jean-Marie Lee, 2017

The reason I made this image was because I wanted to create a crucifixion image that appeared dizzying to the viewer. Parts of this image are film stills from Mel Gibson’s film The Passion. I made the image white to symbolize the shear terror of the experience. As if various states of fear go from black to white. Ironically, white is the color used to celebrate The Paschal Mystery.

For whatever reason, I remember looking at a whale bone carved rendition of the crucifixion with lots of questions. My mind was inquisitively wondering why anyone would kill a whale, strip it of flesh, remove its bones; and then, for the forgiveness of all humanity carve a sculpture of a nude male nailed to a cross.

God, at my house as a child was Saint Michael the Archangel, defender and chief stationed at the front window. Sometimes we said the Our Father and we would occasionally say the rosary, but the main prayer at our house was the “drive way blessing.”

It goes like this: “Dear Jesus, thank you for today. Bless and protect us on our way. Please station your angels one at each window and one at each door and don’t let anyone enter that doesn’t belong. We praise you and bless you forever. Amen”

There wasn’t really talk of crucifixion and slaying evil. In the mind of my youth and probably well into young adulthood, carrying a Holy Cross was seasonal and mostly to celebrate Easter with a basket and a bunny. It would be safe to say that I’ve been trying “really hard” to figure out The Holy Cross concept since 2014.

So, this plog is going to be longer than usual and I’m going to take the crimes of Jesus into common law in the United States in 2019. Then cover aspects of reflection with The Holy Cross. Last, I’ll cover what is the essential concept of The Holy Cross and why it’s a joy to carry your own Holy Cross.

Typically when I look at Jesus on the cross, I ask myself how much punishment is too much and I think about the 30 silver coins. I know what it’s like to sit in silence in a courtroom as my own defense and I know Jesus kept silent for most of his trial.

Jesus was accused of violating the Sabbath law (by healing on the Sabbath), threatening to destroy the Temple, sorcery, exorcising people by the power of demons and claiming to be both the Messiah and the Son of God. It’s safe to say that most humanitarian rights in the United States have come a long way since April 7, 30 AD. In the United States, you will not be forced legally to carry a wooden cross a mile just to be nailed to the cross for retribution of crimes that did not cause another person’s death.

But the United States does have a savage history of inflicting justice even in recent years. If you look at the crucifixion of Jesus, as punishment for crime— do you ask yourself— Why? He didn’t kill anyone! He just said He was God’s Son— “so what.” Israel, just like the United States is a democracy that recognizes “Freedom of Speech” in 2019. But Jerusalem did not recognize “Freedom of Speech” in 30 AD.

Ultimately, Jesus’ claim of being the Son of God would have been treason and considered a direct threat against Roman leaders. Lately, I’ve been thinking about the issues regarding making requests in the work place that could be taken as challenging authority or even making a suggestion to a spouse that could be taken out of context. Our words matter just as much as our actions.

To really pick apart what Jesus was accused of and what the punishment would be, in the United States, I created this list.

Sorcery: There is a broad definition to sorcery so, I did ask google about this one because of the Salem Witch Trials and other “blood libels.” There are various counties and states that have a ban on fortune telling and tarot card reading to protect the gullible from being swindled by con artists. However, sorcery, magic, and witchcraft are legal for religious purposes and entertainment.

Exorcising people by the power of demons: I also had to ask google about this one. Several religious groups have different rituals and reasons for performing exorcisms. The leaders of the religious groups typically gain approval by eliminating mental illness as the cause of abnormal behavior. The United States protects “Freedom of Religion.” Driving out demons from an individual is not illegal. Though, there is an issue of consent. Causing harm, rape, or inappropriate behavior by the person performing the exorcism falls into categories not protected by “Freedom of Religion.” Here is the Wikipedia link about exorcism practices in several religions. en.m.wikipedia.org/wiki/Exorcism

Claiming to be both the Messiah and the Son of God: This is protected by “Freedom of Speech”— forming a cult following that commits other crimes not protected by “Freedom of Religion” or “Freedom of Speech” would be prosecuted. Types of crimes within cults are rape, incest, physical abuse, psychological abuse, withholding education, blackmail, extortion, kidnapping, child labor, human trafficking, and sex trafficking. Someone claiming to be the Messiah and the Son of God could be diagnosed mentally ill if coupled with other symptoms according to the DSM-5. They could also be declared federally disabled. The stigma of having mental illness could be its own torturous punishment.

From this list it’s safe to say Jesus world not be executed for any of his actions in the United States in 2019. He could do some time for threatening to destroy the Temple but He still would not face execution. If Jesus were trying to convert people in the United States in 2019, I think he would face similar problems that he faced in 30 AD. While grass roots efforts are very effective marketing schemes, humans are extremely cliquish and stubborn. I don’t believe Christianity could form in 2019 if it did not already exist. Also, with all the changes nations are making it is important for religions to also grow and change with the times.

So, what exactly is a holy cross in 2019? It’s probably not your enraged grief stricken aunt throwing vindictive hate directly at you because of a gift. (Don’t call me vain. I know there was no attorney and their surname-certainly was not Weinberg.) Sigh— I still need forgiveness too.

The Holy Cross Crucifix is symbolic of Christ’s death as atonement for the sins of all mankind even in 2019 and continuing infinitely. The cross symbolizes sacrifice, suffering, repentance, solidarity, and exclusion. This link is a good explanation of how the symbolism of the cross can apply to everyone’s life. It also explains the variations of holy crosses in external life and internal life. holycrossoca.org/newslet/1104.html

Two questions frequently come up with trying to understand Christianity. The first question is “what is the concept of the Holy Cross?” And the second question is “why are we supposed to be joyful about picking up our own Holy Cross?”

So, what exactly is this concept of The Holy Cross? What I’m referring to is the abstract expression of how The Holy Cross is repeated in our own lives. I’ve had a few streams of consciousness, mostly while listening to pop radio, that were vaguely enlightening. One was, Snoop Dogg rapping, “Point seen, money gone.” Because we need forgiveness. And in the more sentimental realm of considering Jesus’ love, that song is, “Deeper Than The Holler” by Randy Travis.

The Holy Cross is a ritual sacrifice of daily sins of omission, failure, short comings, doing too little too late, and making choices. The Holy Cross is also very much Machiavelli’s “the end justifying the means;” as if Jesus was a bad apple that needed to disappear so he wouldn’t spoil the people of Jerusalem. And that attempt to get rid of Jesus really didn’t work because He came back three days later. The Holy Cross in many many many ways is like making a bad decision that comes full circle. And that’s why we celebrate the Eucharist.

So, why are we supposed to be happy about our own Holy Cross? Jesus did not joyfully carry his cross to Mount Calvary. He cried, signed, moaned, shouted out in agonizing pain, and He asked God why He was abandoned. This was not a “find your bliss” adventure. In my eyes, it’s really bothersome that all that suffering was out of love, joy, and forgiveness. Enjoying pain or enjoying seeing others in pain is sadistic. So, where exactly is the joy?

Forgive us our trespasses as we forgive those who trespass against us.